[I asked her] what does it feel like to be a hurricane?
To be movement
To be wave
To be woman made word
A swirling mess of sound with [screaming at the] centre
The silence of every word said against [her] swirling in the eye of [her] perfect storm.

The perfect storm of a renegade womxn who wears planets in her hair and carries Manjink secrets in her eyes. Who speaks to everyone and spends hours on riverbanks. Who seeks stories to soak in, and swims at night with the light of the moon. I recall encountering Purity for the first time in the white-liberal-bohemian-rhapsody streets of Observatory, Cape Town. I want to say that this momentary meeting of our worlds occurred at what I then called church, this being Gandalf’s; a temple of punk rock and metal sacrilege, that me and mine would convene in to worship; angsty amens declared in head-banging unison in our mosh-pit congregation. A divine Black and Femme anomaly amidst her knitted family of renegades in the form of bands, Fruit and Veggies (which she founded), and The Pranks. Even then, something about PURE – as both person and artist – felt so palpably and excitingly uninhibited, and as you and I both know; that there is something so beautifully and recklessly dangerous about an uninhibited womxn, about “an opinionated freethinker seeking truth and self-liberation”.

With a music career that spans years, traverses genres — “PURE is constantly changing…i see all parts that make who i am, as major contributors to my growth. They all cross pollinate into each other like crazy because essentially they share the same consciousness and identity” — and speaks for itself, the sonic persona of PURE is a fleshed descendant from the family tree that reaches from the neck of Sister Rosetta Tharpe’s guitar, to Skunk Anansie’s Skin’s clean shaven head, is carried in Brenda Fassie’s raspy and Hansa soaked utterances of “I’m no weekend, weekend special and lives in the afro-futurist, multi-disciplinary practice of sis JoJo Abot; who is one of PURE’s dream collaborators. A lineage of “don’t give a fuck rock n roll and punk”, so often and ignorantly defined as a white cultural lineage. 2018 saw the artist step out on her own with the release of her solo EP Vocal Alchemy; a sonic offering of spell binding subterranean, soulfully oozing, low-fi melodic meditations fused with a masterful lyricism. I ask her of those who came before who have influenced her work or have become intimate companions to the way she creates and imagines within her praxis:

“Growing up i was really inspired by Brenda Fassie, to me she was punk as fuuuuck. Obviously at the time my understanding of it was completely different, and perhaps jaded by the media BUT there was just this fire about her that really intrigued me. What intrigued me even more was her ability to remain the household sweetheart even though she represented something so foreign to the [B]lack community at the time – a womxn who was publicly opinionated and did whatever the fuck she wanted without giving a fuck. THAT’S POWER. Umalum Themba (no one in specific) who despised the idea of womxn having any kind of freedom still jammed hard to “Weekend Special”. She stands out the most because that was the first impression/concept of femme fierceness that became accessible to me without judgment. I only started awakening to the idea of searching for my own musical taste much later on and fell in love with Grace jones, Skunk Anansie, No doubt, Betty Davis etc. All of a sudden i felt like i had an everlasting support system through the music i was discovering. Looking at songwriting particularly – how this was being utilised as a tool for different themes. My approach with my performances will always have a heavy punk influence, even though, my sound has had such an evident change of pace. so the way that i write, on some, level accommodates this. This is also my own interpretation/understanding of what i was hearing in the music that was inspiring me”. 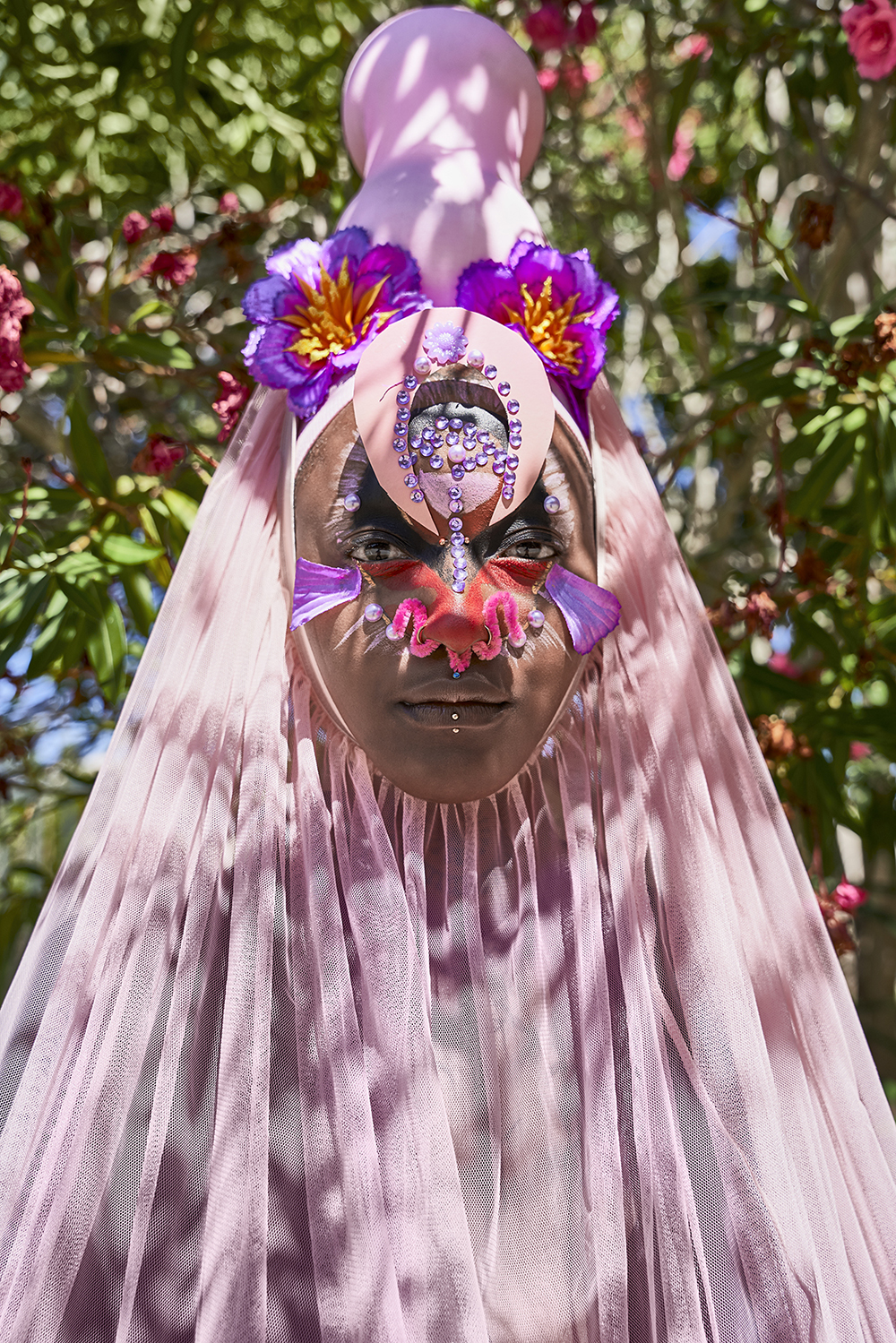 However, as many of us who choose to root our dreams, joys and practice within the Land of Misfit Toys know- society’s precarious preoccupation with lines, boxes, dotted Is and crossed Ts, means that living under the rays of a different sun can also – a lot of time – feel like living in a suspended state of lonely misunderstanding. Especially when you dare to question its ways, and even more especially when that society has a profoundly limited imagination where the possibilities of your life, curiosities and expression as a racialised and gendered subject are concerned, as PURE shares with me:

“Growing up for me felt like a constant transformation in a time and place that didn’t really feel accommodating. I never really knew how to articulate the way i saw the world, which perhaps was the catalyst for this deep feeling of inadequacy and feeling of displacement. I was annoyingly curious and foolishly ambitious which got me into a lot of trouble – most of my questions were usually never answered or i was told to stop asking them, which made me feel different (not in a good way). I was very expressive and fiercely intrigued by the world outside my immediate environment. I’ve always been a seeker, through self exploration and [a] curiosity to learn new ways of growing my ideas. Because of this, i became strange and un-relatable to my community and my own family. I seemed to maintain better relationships with people when i learnt how to water down my character a little – in the way[s] that i thought, dressed, expressed my feelings, shared my interests and ideals etc. My mother (bless her soul), was as supportive as any [B]lack mother could’ve been, given my individuality. But when the neighbours got talking and making their disapproving opinions known, she became very conflicted. As a kid my weirdness was more tolerable, i guess, but as i got older it just made people very uneasy. I went from being called the cute bubbly one to the weird satanic kid from down the road haha. Satanic was just the label best fitting for a way of being that couldn’t be explained or was unfamiliar to people. There were many labels, in attempts to understand this image they were presented with. Out of all honesty i didn’t even understand it myself”.

Although we haven’t had a release from the artist since 2018 – which is absolutely fine as we also need to allow artists the time and space to create instead of demanding constant outputs from them like machines of capital reproduction – she has assembled a loved and trusted group of individuals to form a live representation of her solo sonic iteration; PURE. She goes on to say “As much as the solo time was much needed, it’s also been a very different approach energetically. I’ve been missing having people onstage with me, which really helps channel more of that powerful energy source that comes with being supported with live instruments”. It’s a confounding exercise of ones imagination, to try think of who PURE would be and what the artist might have sounded like, had she not found her tribe in the form of Durban’s punk scene while at university. She goes on to express:

“In my second year i got introduced to the Durban underground punk scene, this is where everything really began… Punk rock gave me what i had been looking for all my fucking life, a platform where i could fully express my feelings, surrounded by people who were constantly pushing the boundaries of social constructs…Durban during that time was truly something special. It was almost as though time itself was constantly being manipulated in perfect synergy by some omnipresence for our greatest benefit (hahaha), i.e. to maintain a sophisticated level of debauchery. Imagine a kind of synchronised chaos that co-exists blissfully along side a real need for community and self freedom. A freedom of assembly, speech, taste, sexuality, expression, movement, curiosity… the freedom of knowing that whatever you felt – at any given time – was valid and resonated with a tight circle of people who were ready to fuck shit up with you, no matter what – hive mind. We were an entity that shared their knowledge with one another. A collective intelligence highly dedicated to creating a movement that would sustain our non-conforming personalities. The time was magic but it was far from perfect. The scene was predominantly white and considered to be a white space by most but us kids of colour had strong [a] presence. We took up space and used our voices. Our scars were differed to most of our white friends. Most of us were in some way rejected by our families before finding social refuge in this sub-culture… For me, being Punk offered vitality and a safe space for my bones, a powerful alternative especially being a young black woman using her voice to demand attention and respect. So, essentially we were all meeting each other in the same space, with fists in the air for different reasons”.

In this current moment and looking beyond it, I think a philosophy of creation guided by a spirituality of connection to all beings and worlds, is only just a part of what will save us from ourselves- but an important part nonetheless. I feel this, in the way PURE talks about the world, “our relationship with mother earth reveals so much about this disconnect, to control the earth is a human illusion as we are almost insignificant when compared to the power of both destruction and regeneration that our mother is capable of”, and I feel it, moving through her work; forged in “a hurricane with a swirling mess of sound with [screaming at the] centre”.

Make up and styling by: PURE

It’s Women’s Month — where are our local sex icons?