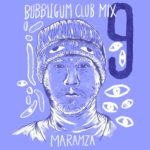 A few weeks ago we featured Maramza on the cover of Bubblegum Club. Maramza has played an important role in pushing South Africa’s electronic music. This 11 track mix demonstrates the work of a producer who has sonic passion flowing through his veins.

For a little more insight we spoke to Maramza about the mix and what he has planned next.

Could you tell us a bit about the mix you have created?
Its a snapshot of the kind of sets I’m playing at the moment. A balance between broken beat electronica and mid-tempo bass house with a good sprinkle of turn-up. This mix is 90% local which isn’t how my actual club sets are (more like 60/40 local / international) and although it features Fosta’s ‘Sjoko Mission’ from the recent Kwaai-Fi comp, I don’t really play straight gqom or sjoko joko in my sets. But otherwise that’s my club DJ sound.
Have you had a hand to play in every track on the mix (how so)?
Not all the tracks. I produced Zaki’s “Focus”, remixed Snapbvck’s “Noise ft Red Robyn” and Dunn Kidda’s “Laanie Level”, bootlegged Kaytra’s Track Uno and obviously produced my own joints on the mix. But Fosta’a “Sjoko Mission”, Dunn Kidda’s “Laanie Level Pt. 2” and Jumping Back Slash’s “Come Rescue Me” are just tracks I really feel.
This mix seems to touch on the past, the present and the future of South African electronic music production? Was this intentional?
No, not at all intentional. But its nice to think of it that way. I guess it makes sense with the old-school mid-tempo feel and future beats kind of vibe. That’s dope.
What next for Maramza?
Last year was cool, I remixed some tracks, I produced some tracks for other artists, I collabed, I created some of my own music. So I guess I just wanna repeat that and release as much nice music as I can. I love to DJ wherever there is an open-minded crowd (as in a crowd that doesn’t get miff when I play that old-school mid-tempo or future beats). If I get a couple of gigs a month, I’m more than happy. Every now and then I catch feelings like any artist, craving more gigs and more exposure, but I’m at my best when I’m just grateful to get booked and have my music heard. Really want to help Kwaai-Fi put out a couple of interesting comps this year. That’s a biggie. You can hold me to that.
More music

Under Pressure Sundays Put You On

The rise and rise of Moonchild Sanelly