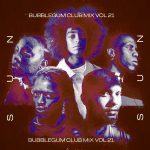 Taking their time, they work their way into greeting and welcoming you into the world built by the sonic landscapes and textures that are too follow like a meticulously crafted establishing shot for a piece of beautiful Japanese film. Cinematic in it’s very essence the mix created and curated for Bubblegum Club by Sanele Ngubane aka SUN, who is a part of “Izimakade Records, a South African label specialising in the spectrum of [B]lack experimental music, founded by him and Desire Marea“. The first time I listened to it, was yesterday as the now leaning towards stark afternoon danced through leaves and into my kitchen. From first encounter, the intricate play of sounds, which are different but not removed fro each other, and the incantation of story and complexity carried throughout the mix let’s you know that “no, this will not be an easy listen per say but it will be a rewarding and endlessly giving one”. It will require something from and of you- a present act of listening if you will, but it will not be a tiresome exercise.  Sitting with the mix as it continues to introduce itself to me, I begin to think of it as a conversation of the realities and possibilities of sound, “this is music that has carried me along the years”, he says speaking about the mix. I think the mix itself speaks in someways to Sanele’s creative process and some of the underlying philosophies that may underpin it; deconstructionist, post-harmonious in its harmony, somewhat mathematical and theatrical- and by this I do not necessarily mean grand, as life’s theatrical moments can be found in the little and quite movements too. This approach to musical craft that’s felt in the mix from start to finish can also be sensed announcing itself in the production work SUN has done for other artists. Namely and most recently with Izimakade Records first release Marea’s self-titled record DESIRE. Diving more into the mix Sun had this to say:

“…it’s music that has helped me discover myself in terms of my artists purpose, my identity in art. [The music picked] is mainly from marginalised groups around the world you know? So I relate to most of the contexts in which it was written in. There’s no particular [narrative] order the songs are in, I just played by feeling… I didn’t even really read keys and tempo and was just guided by the feeling. Importantly, this music has been the blueprint to my record that’s coming out. These particular artist’s albums have been what I’ve been listening to for the past 4 to 5 years and throughout that time and in that time, I created this record which I’m currently wrapping up.”

Look out for SUN’s record being released later in the year!

Ntu explores the boundaries of RnB on 'Perfect Blue'

dumama and kechou's buffering juju album — an exploration of freedom

Off the Score Explores the Edges of Musical Experimentation