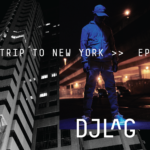 Gqom innovator, DJ Lag is about to strike again with his first, self-titled EP having only come out last year. DJ Lag is a pioneer who propelled the  Durban Gqom sound straight into the capitals of the international electronic music industry.

DJ Lag has performed across the country, including at the Cape Town Electronic Music Festival, and has shared the stage with respected artists such as Skrillex and Euphonik at the Bridges For Music workshop in Kliptown, Soweto. He debuted in the international scene at the Unsound Festival in Poland and has since performed in a number of other cities.

The King of Gqom, together with his management company Black Major, is dropping an exclusive EP to fans via WhatsApp for free on the 14th of July.

DJ Lag’s Trip to New York EP is a 3 track EP with a remix of Khonkolo from Okzharp. The only way fans can get the EP, is by heading over to djlag.com and making sure they are on the send out list by 11am on the 14th. The EP will sent out to all those who have signed up in time.

Fans who sign up for the EP will be the first to get exclusive links to future tracks.

The 90s saw the advent of streetwear rising to the attention of the elusive “fashion” crowds around the planet. A blend of minimalism fused ...