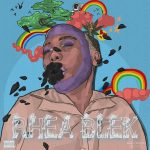 Rhea Blek calls herself The Goddess of Finesse (aka Finessa). It’s apt because she has an impressively delicate touch and skillful use of her voice, which is pretty in line with the definition of ‘finesse’. Rhea is singer/songwriter born and bred in the city of Durban, which you can kinda tell if you’ve been paying attention to the sounds coming out of the 031 lately. Although she says she creates genreless music, Rhea is part of a growing group of brilliant young women in Durban, like Red Robyn, Nipho Hurd, and Victoria Raw, who are making incredible neo-soul, R&B and jazz influenced songs that touch the soul. And I don’t even believe in souls.

Rhea is firmly her own woman though, and while she may be playing in similar spaces, she’s doing it completely in her own way. On the opening track of her debut EP THIIIRD WAV, ‘Terms and Conditions‘, she opens up by confidently asking if she can shoot her shot and get down to business with a fine-as-hell man, with no strings attached, terms or conditions. Although, she also admits that she wouldn’t mind a little l-o-v-e, she’s happy to just get what she wants if the fine-as-hell man is down with it.

Track 2, ‘Clyde‘, is a take on Bonnie and Clyde, but, as Rhea explained on Facebook, “this time, instead of Clyde running around and doing the crimes and Bonnie being down for it, it was Bonnie being the boss and Clyde being a loyal lover and partner in crime. That’s why the hook says ‘ride or die, sink or fly with me’”. Apparently a friend was supposed to do a verse but “the niggas were like ‘what you wrote is too hot, the song is yours, just write for the whole song’”.

‘Clyde’ is actually what inspired the whole EP, or, as Rhea puts it in another Facebook post, “After that, we decided – you know what? We’re making an EP, that’s what the fuck we gon’ do!” She also explains the concept for the album in her candid post, “I thought about centering it on love and on a love story with someone that started since we were kids, that’s where ‘TEENAGE DREAMS’ comes in.”

‘Teenage Dreams‘ is the last track on the EP and it’s a cute love song. According to Rhea, “That song is a story of how and where the love began and how long its sustained to the present. It’s just a big thank you to the dude and appreciation for the love. And it’s called ‘TEENAGE DREAMS’ because the love is so amazing it feels like we’re teenagers in love and we’re dreaming.”

Rhea has been racking up the gigs around Durban and has even made a few Gauteng trips of late, and now that she’s put out some music, she can’t wait to put out more. She’s actually working on a follow up EP already and will be part of the We Are One Festival in Joburg alongside the likes of Moonchild, DJ Doowap, & Nonku Phiri on the 31st of March. Make sure you look out for The Goddess of Finesse, you’ll be impressed.

Lianca Heemro is a trans-disciplinary artist from Cape Town. Her work is centred around past and present socio-cultural as well as socio-his...

The UK Acid House movement of the late 80s is synonymous with fevered hedonism. The peace and love experience - fuelled by copious amounts o...

The text that is to follow- is the continuation of a conversation and speculations from a place of suspension, on the current and possible f...