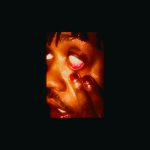 It might be counterintuitive, but I think you have to be pretty damn confident to call yourself Theleastimportant. Most rappers’ egos wouldn’t let them dare undersell themselves right up front like that. Bravado and being braggadocious are pivotal characteristics of most create-a-character rappers so just by his name alone, Theleastimportant is telling you that he’s not doing the same thing as the other guys.

His name also gives you an idea of who he makes music for, kids who might have self-esteem issues and need someone to relate to. Or other issues like depression, which is both the subject and title of his latest release. As he explains it, “To me, depression is not only an illness but also a form of expression. Too often we’re shadowed by self doubt and petty hatred we often find ourselves nestled in that terror. I believe that every emotion and feeling can be used as a form of art and identification focusing on the ideologies that make us human. I’ve been depressed for a great part of my life and I use it as fuel in my music to create a pillow of comfort for those who will relate.”

From Black Flag’s “Depression” to Nine Inch Nails and Johnny Cash’s “Hurt”, many musicians have been plagued by depression and found their own way to express it. But every generation needs their own artistic peers to see themselves in. To express their experiences and feelings in a way that’s of the time, and feels relatable to them. Theleastimportant’s “Depression” is certainly of its time and will feel relatable to many of us in 2019.

The song opens with “This depression’s got me feeling so good, I’m acting really badly” said with a drawl like it’s 3am at the club and the combination of coke and booze is keeping the barely intelligible conversation going. The music video uses juxtaposition to highlight his depressed self as a shattered kaleidoscope of his regular self. The video is busy and disjointed, which gives you a sense of being overwhelmed, whilst the song itself is the opposite. The music is wavey and ethereal, with plenty of space to gently guide the cyclical lyrics along.

While depression is a tough illness for anyone to deal with, Theleastimportant created “Depression” to show that there’s a beauty in the darkness. “The darkness is not such a scary place and it shouldn’t make us bad people because at the end of it all we all want to see ourselves do great things in life. This music video is an illustration of how the darkness, how solitude and sadness can be used to create something alternative and unique. The split screen editing is a portrayal of an artist who has deviated from accepted social behaviour and how the mind often exerts itself with depressive thoughts. This composition was made to build awareness of depression and any other mental illnesses that causes hardship.”