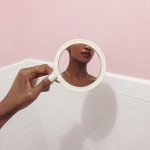 Adrienne Raquel is a photographer and art director based in New York. Drawing her inspiration from Summer, femininity and tropical motifs, her work evokes playfulness, vibrancy, and nostalgia. With the use of distinct colour and composition, Adrienne’s striking imagery has led to many large-scale brand collaborations. She has been deemed an influencer and one of the top female creatives to follow by publications such as TIME magazine. I would like to look at one of Adrienne’s projects that is removed from her commercial identity, namely, ‘Self Portraiture’. This series is noteworthy as Adrienne took an unconventional approach to capturing self portraits. Whether this body of work can be constituted as self portraits will be evaluated.

In the traditional sense, a self portrait is thought of as an image that captures your likeness, this then means an image taken by you of your face. Adrienne warps this idea in her series containing hands, half a face reflected in a mirror, a silhouette of her naked body captured from behind, a foot and tropical plants. All of these images are tied together with pastels and the use of minimalist patterns.

What is remarkable about this series is Adrienne’s minimalist approach and her choice of composition. These images do not contain any surplus visual information. By this I mean that the images purely contain the subject, the eye is thus not distracted by anything within the image frame and will focus on the subject with ease. Her composition that brings about the question as to whether these can be considered self portraits comes from her choice to not show the full picture, but instead to show single limbs or parts of Adrienne such as her lips reflected in a mirror. This choice was masterfully combined with soft, playful colours, minimizing the possibility of discomfort of looking at separate limbs.

Adrienne’s series is a powerful testament to femininity and her selection of props tie her images together to create a seamless effect. Another observation is that the titles of the works speak about Adrienne’s character, such as the image of her floating arm extended and her hand clasping a glass, titled ‘Glass Half Full’. This image may be referring to her as a person who tries to view things the “glass half full” way. These images capturing fragmented parts of the photographer might also be an indication that Adrienne is a relatively private person and is not comfortable with sharing her likeness boldly.

Can this series be regarded as self portraiture? I believe so as Adrienne is establishing a new framework around the definition of what constitutes an image as a self portrait. Why do I express this? As Adrienne is including herself in the images and just because she chooses not to do it in a traditional sense, does not mean that it is not correct. Adrienne is showing her viewer an extremely intimate look at the parts of herself that make up who she is as can be seen with the ‘Glass Half Full’ image.

The 90s saw the advent of streetwear rising to the attention of the elusive “fashion” crowds around the planet. A blend of minimalism fused ...