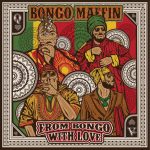 From Bongo with Love Album Cover

It’s been 14 years since the iconic kwaito pioneers Bongo Maffin last released a full-length album but the quartet hasn’t missed a step with From Bongo with Love. Now, I get that for some of you, Bongo Maffin is Van Halen and you’re Billie Eilish, but whether you grew up with them or whether this is your introduction to the living legends, From Bongo with Love is an album that should be in every South African’s collection.

Often, after a band has been on hiatus, reunions are cash-grabs and the love and comradery that created the original songs you connected with are no longer there. That just simply isn’t the case with this album. I’m sure many of you know about the various tensions between band members over the years, but when one listens to From Bongo with Love, it sounds like those tensions have dissipated with everyone getting equal chance to shine.

Bongo Maffin made up for lost time by providing us with 17 new tracks that effortlessly blend kwaito, reggae, hip-hop, afro-pop, and even touches of gqom and amapiano. While the work  is clearly an update of their sound, it doesn’t lean hard into what’s popular right now and instead, subtly incorporates these newer influences into their repertoire.

As expected, From Bongo with Love is a deeply political album. Bongo Maffin as a group and as individuals have never shied away from politics and telling the truth as they see it. The album is a love letter to Africa and the continent’s people. It features a deeply moving tribute to Winnie Mandela- and strong African mothers in general- called “Mama Winnie”, a defiant lament about the destruction caused by colonialism and slavery in “Mafatshe”, and calls for African unity over xenophobia with songs like “One Africa” and “Harare”. It’s not all politics though. The Spanish Caribbean influenced “Rofo Rofo” is a hip-swinger of note that will have you getting sweaty with a significant other- or a friendly stranger on the dancefloor. And even political songs like “Freedom Fighter” will get your body moving.

I know some Bongo Maffin fans who were worried about this album, and understandably so. 14 years is a very long time to not be making music together. Not to mention that it’s been 18 years since Speedy was part of the group. If you were worried that King Tha, Jah Seed, Stoane and Speedy wouldn’t be able to recreate the magic they’re known for, I’m here to tell you; you can rest easy. Bongo Maffin are back.

Listen to the album here.

SIO's A Place to Run is Moody and Mystical

Lianca Heemro is a trans-disciplinary artist from Cape Town. Her work is centred around past and present socio-cultural as well as socio-his...

The UK Acid House movement of the late 80s is synonymous with fevered hedonism. The peace and love experience - fuelled by copious amounts o...

The text that is to follow- is the continuation of a conversation and speculations from a place of suspension, on the current and possible f...