He grew up thinking that, of all the Blacks in Kentucky, only the five of them were men… Is that where manhood lay? In the naming done by a whiteman who was supposed to know… It was Schoolteacher who taught them otherwise. They were only Sweet Home men at Sweet Home. One step off that ground and they were trespassers among the human race. Watchdogs without teeth; steer bulls without horns; gelded workhorses whose neigh and whinny could not be translated into a language responsible humans spoke.

“My body its memory: to share a memory is to put a body into words… Experiences like this: they seem to accumulate over time, gathering like things in a bag, but the bag is your body, so that you feel like you are carrying more and more weight. The past becomes heavy. We all have different biographies of violence, entangled as they are with many aspects of ourselves: things that happen because of how we are seen; and how we are not seen” Sara Ahmed. Some inheritances are not those of wealth but are of legacies of loss — returned to us in figures of ghosts stuck in purgatory — that attempt to make haunted houses out of people. A state of purgatory attached to a History that sought to categorise them on the hierarchy of humanity, in the negative. Not human, not worthy of paradise, not men. The surface of black flesh, is marred by hegemonic History’s hieroglyphics of racially gendered and sexualised assemblages. A grammar of objectification that still permeates into the present socio-political realities and pyschosphere of modern society. Assemblages that worked to symbolically render Black individuals into non-human entities; to distort, to ticktock and turn untrue. Where constructions of manhood are concerned these assemblages worked to render Blackmen in phantasmagorical fabulation as “watchdogs without teeth; steer bulls without horns; gelded workhorses whose neigh and whinny could not be translated into a language responsible humans spoke”. Danger and fear becoming instructive and descriptive languages where the bodily schematics of Blackness in relation to masculinity were concerned. Thus, Informing how those who occupy — what Histories of colonisation would have you believe are the diametrically opposed spaces of Black and Man — are known. How they come to know themselves and even the reach and scope of the desires, joys and possibilities they are able to imagine and experience in their Historically inscribed bodily vessels. 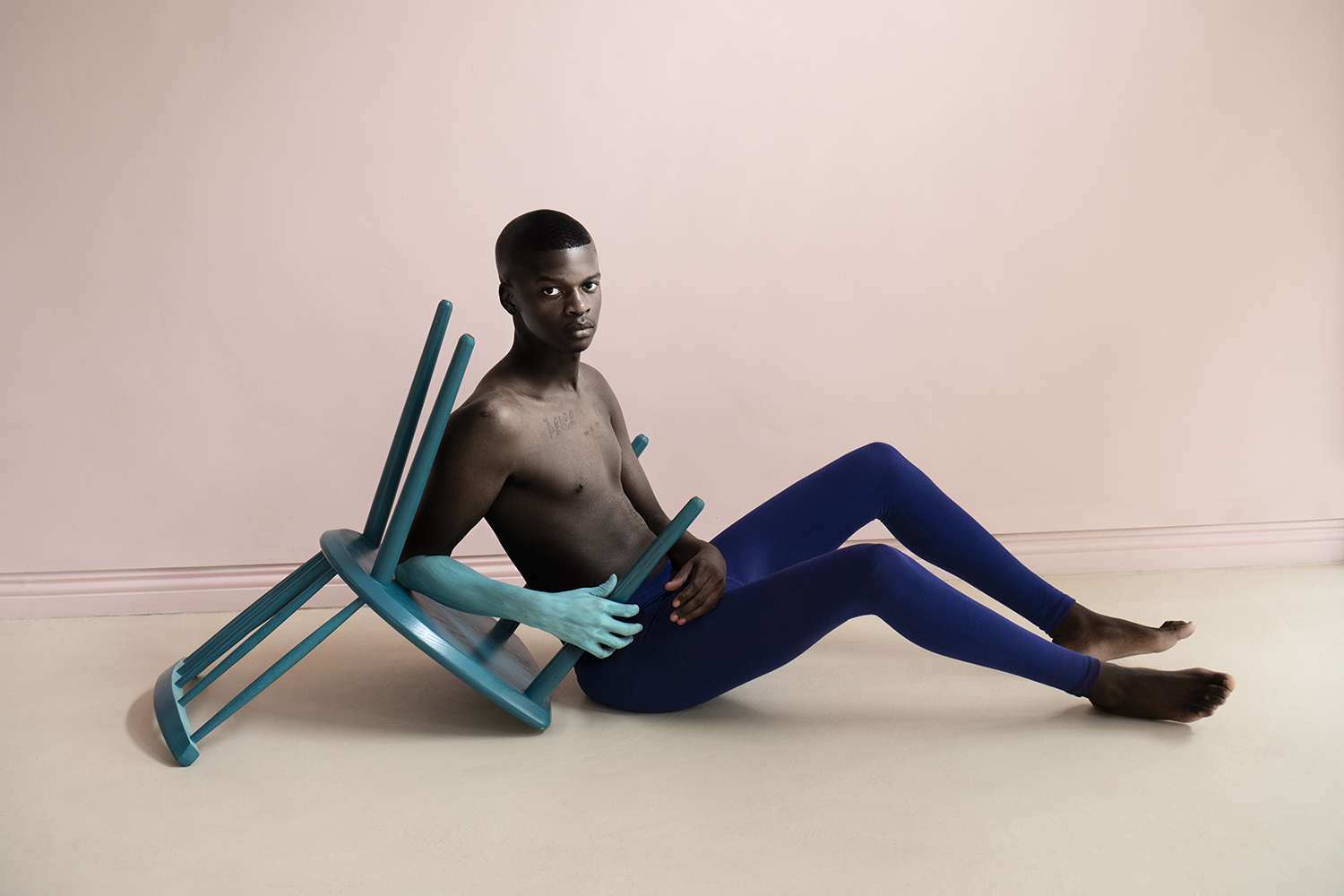 It was within the rhetoric and ideologies of these racialising assemblages that Blackmen came to represent a physical and ideological sight of brutish sexuality through the construction of the image of the menacing and dangerous black man, who had to be controlled or banished. As pondered by Stamp Paid, one of Morrison’s characters in Beloved: “Whitepeople believed that whatever the manners, under every dark skin was a jungle. Swift unnavigable waters, swinging screaming baboons, sleeping snakes, red gums, ready for their sweet white blood”. Dangerous Bodies, a continuing photographic series by Jamal Nxedlana is firmly located within this History’s ideological and discursive terrain, however, punctuated by an intimate embodied experience that ushers its critical visual explorations into the now now and historical space of South Africa; where “the past is living rather than dead, [and it] lives in every wound that remains open in the present” (Ahmed, 2014: 33). As Nxedlana expresses talking about his practice and the series, “My work as a photographer is personal, it is about my experience as a [B]lack man in post apartheid South Africa (the rainbow nation, a space that is organised or assumes non racial-ness). It comments on racial injustice especially racist stereotypes and how that’s affected me as a person”.

A single Black body in the shape of a man fills the space in front of a pale pink and pastel mint-green wall. Rigid and robotic in its form; ventriloquist-doll-like, the hands that would control it concealed in invisibility. Limbs of blue, red and green seemingly hovering in unattached dislocation from their (?) body — there is a sense of surrealist dis-ease captured and invoked by the images; snapshots of a body not quite its own and not quite human, even in all of its humanity. With the continuation of his Dangerous Bodies series, Nxedlana’s surrealism and critical abstractions of African decent, have taken on a character of animatedness as engaged with by Ngai Sianne in her essay Animatedness which appears in her book Ugly Feelings. Thus, both become more than aesthetic, thematic or conceptual strategies and seemingly work to perform the very double consciousness like conditions of occupying the space of Man when and while Black, as he shares with me:

“I am interested in abstraction and surrealism because of my experience as a [B]lack man in post apartheid South Africa. Living under capitalist and white supremacist conditions makes me feel abnormal and not whole. And abstraction and surrealism feel like an apt way to represent this in my work. The abstraction manifests as decontextualised space, a space with less information, so often a an outdoor wall or a wall within a room with no other details to tell story. The model and the symbology I want to present becomes the only story, its something that the audience has to face”. 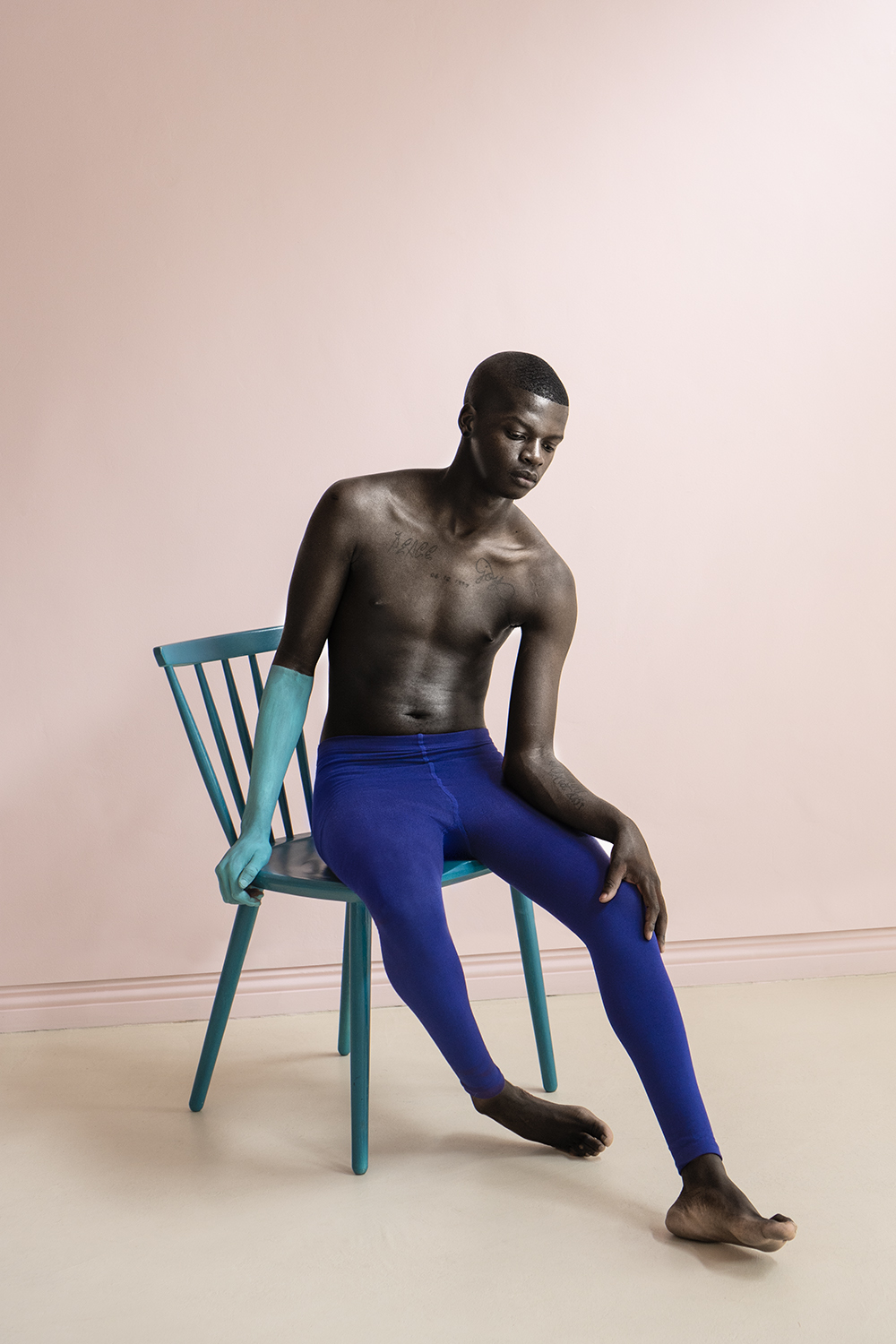 The body remembers, its wounds carry enfleshed memories of pain. I think of James Baldwin and Nikki Giovanni’s A Conversation. Of the moment when ‘Jimmy’, as he was affectionately known turns to Nikki speaking about Everybody’s Protest Novel from Notes of a Native Son and says:

“I was trying to elucidate for myself a theology and the affects of a theology which I then – in that moment realised – I carry in myself, you know? It was not the world that was my oppressor only, cause what the world does to you if the world does it to you long enough and effectively enough you begin to do it to yourself. You become a collaborator, an accomplice of your own murderers because you believe the same things they do. They think it’s important to be white so you think it’s important to be white. They think it is shameful to be black and you think it is shameful to be black and you have no corroboration around you of any other sense of life… you can hardly move by the time you’re 14, you’re always scrubbed and shining, you know? A parody of God knows what! Because no white person’s ever been as clean as you have been forced to become. You know, and you gotta to somehow begin to break out of all of that and try to become yourself”.

Flesh codified in ways that sever, dismember, and erupt in various exploding directions. A body that is not at ease in the world, the black-man-(un)made; come to represent a dangerous body all wrapped up in darkness and the jungle — an experience and the affects of which — Jamal himself has had to reckon and break bread with, coming to also inform the photographic series’ aesthetic and thematic approach as he shares:

“I felt a pressure to dispel stereotypes about [B]lack men and as a result was reacting as opposed to expressing and defining myself from a point of possibility. I had to be eloquent, I had to be excellent to a degree that was obsessive which comes out in the image’s obsessive nature when it comes to symmetry, forms and colour relationships. with all the messages I have consumed about black masculinity [where] the negative ones far outweigh the positive ones… Fortunately as I’ve become older I have developed more criticality when it comes to these messages and that has been super helpful but also lived experience and the local and digital [B]lack communities I am a part of has contributed to much healing.

Nxedlana’s words as he comes to the end of what he is saying resuscitates to me, the cultural practice of Ukuzilanda and Lunga Ntila’s exhibition of the same name from last year meditating on the sacred ritual. Ukuzilanda is an integral part of the process of death and dying across many Black cultures within Africa. It is a ritual of ‘fetching’ the body, bringing it home to it’s people so that it does not remain lost; stuck in purgatory between two worlds. Ukuzilanda, a body reclaimed in love, mourning, healing and community. “Flesh that weeps, laughs; flesh that dances on bare feet in grass”, loved hard — loved back to itself. 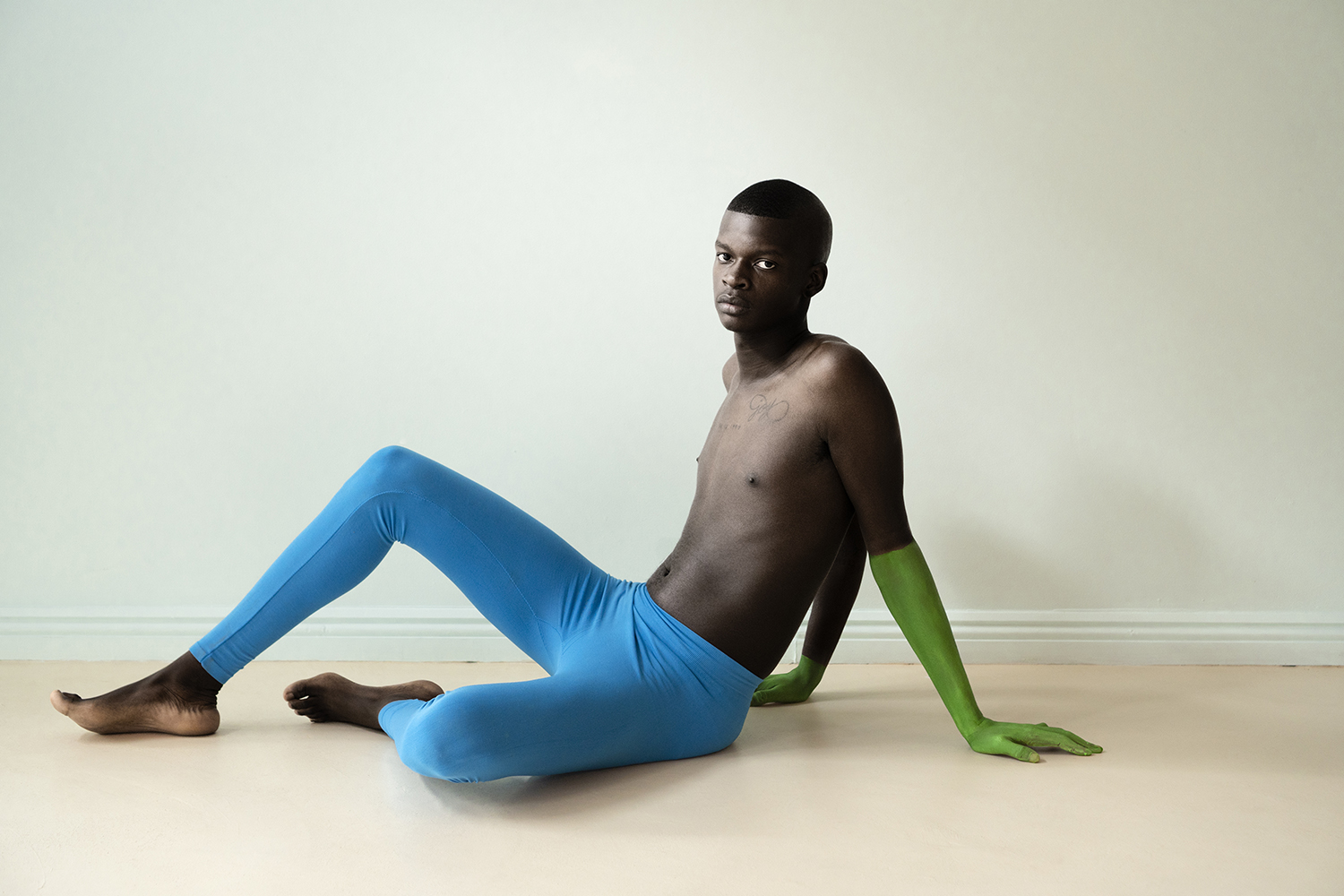