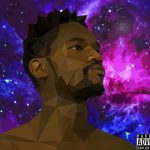 Ngola ticks all the boxes for someone who is poised to break into the public consciousness. He’s a multifaceted creative who is certainly a go-getter. The Umlazi-born actor and musician is someone who seems to be constantly making moves and putting work into their career, with each step they take helping them build a long-term legacy.

Now, I didn’t know about Ngola (Kuthula Magubane) until a few weeks ago but it turns out he’s been in the game for a couple years now. He pursued a BA degree, majoring in Theatre Acting and Music Business at AFDA in Cape Town, and soon after getting his degree he got picked up by Rude World Records in 2015. Things didn’t work out with the label and Ngola managed to buy himself out of his contract before moving to Jo’burg where he released his ‘Rocket Power Love’ EP in November of 2017.

As far as I can tell, it got a bit of love from a few blogs but never really moved the needle on a mass scale. It’s a shame because it’s a solid first release that draws on a broad range of sounds without being disjointed and, while Ngola’s AFDA education might give you some preconceived notions, he certainly raps like he means it and bares his soul whilst also offering that bravado that makes listening to rap the ultimate ego boost.

Ngola has really put that BA to use by co-founding and becoming the CEO and co-owner of a multi-medium creative label LOFW (Leaders of the Future World), and has shown Donald Glover tendencies by picking up a number of roles on local television. They include “Malibongwe” in the drama series Is’thunzi I and II on Mzansi Magic, “Sphe” in the series Sober Companions on SABC3, “Duna” in the comedy series Single Galz II and as the lead (Nathi) in a South African short film directed by award-winning writer and director Zamo Mkhwanazi.

Ngola has just got back from the United States where he had the opportunity to perform in Atlanta, North Carolina, and Florida, and also work with Santiago Morales, a London based Colombian producer whilst he was at Flux studio in New York. Like I said in the intro, the dude has been making moves and putting in the work.

You’ll get to hear new music from Ngola this week as he asks you to “Imagine Africa with no borders” on the hook of his latest single, “F7”. You’re probably not going to hear it on the radio as the beat’s a bit too unconventional for local playlisting but I love the use of synths and the moody tone they set. In essence, it’s an I’m-the-shit-and-you’re-not track but in it, Ngola is open about some of his shortcomings so far, like making a mistake from signing a deal. He doesn’t dwell on it too long though because he immediately follows up with “Fuck it, I’m back, chasing the mils”. Will he achieve the mils? I don’t know, but he sure ticks all the boxes.

Sepideh Mehraban // A Tapestry of Histories

Stiff Pap at the forefront of Future Kwaito