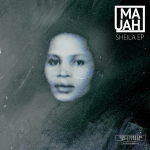 Before the current wave of soulful songstresses from Durban who blend R&B with hip-hop and jazz, like Red Robyn, Victoria Raw, and Rhea Black, I used to be enchanted on the weekends by Umaah Khumalo, or as she was affectionately known then, Apple. Umaah mostly used to kick it with Ex-Con (Existing Consciousness), a high energy free-flowing new age act that would blend hip-hop with jazz, rock, soul, R&B and whatever else tickled their fancy. Even though she was the smallest member, she never came across as such on stage.

Umaah has always felt bigger than her surroundings. Like she couldn’t be contained, although, for a while in Durban, she was a bit. I’ve had a few conversations with her over the years. About the struggles of being a young musician, of balancing work with being in a band. About whether or not that band would make it. It didn’t. But that doesn’t mean Umaah won’t. Her debut solo EP as Umaah is a massive step in a direction that could see some success for her.

Produced by Jozi’s experimental electronic music genius, Micr.Pluto, Umaah is given plenty of space to shine on the Sheila EP over sounds I’m not used to hearing her on. No acoustic guitar or big band behind her. Instead Umaah gets to pair her voice with some good-old fashioned boombap (with Micr.Pluto’s modern touches, of course), trip-hop, and even a few dubsteb wubs.

The opening track, ‘Baptist‘, is my favourite. The beat kinda reminds me of Nas’s ‘Represent’ and coupled with Umaah’s soulful vocals, it takes me back to the 90s, driving around in my mom’s Uno Fire whilst she’d play R&B compilations with the likes of Erykah Badu and Lauryn Hill on them. There’s a good chance Umaah grew up on Erykah, as she’s the artist I can most liken her to. She’s experimental with her vocals, although she keeps things relatable with an ever-present layer of vulnerability.