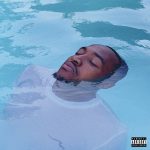 Pietermaritzburg born Xenlaii is more than a rapper, with the multiskilled artist having dipped his toes in design as well. However, it is his sonic diversity that shines through brightest on the ‘Surf: Am EP’. Sounds range from LoFi beat loops, Trap bangers and production that sounds distinctly West Coast.

Thematically as one may assume, the EP centres around the idea of a wave, as at its highest point it all comes crashing down. He explains that the project came about after the tragic passing of his mother and his attempts to at least temporarily escape the reality of her passing.

“My mother had just passed away and I went to Durban for a few weeks to try and escape the reality. I would find myself in a cycle of partying, which would be a heightened experience that would help me forget, then I would crash in the morning and all reality would come back when the experience is over. What was interesting was how the universe sort of put a mirror in front of me this one day while staring at the ocean. It was a metaphor for my life at the point. My days were a constant loop of extreme highs and extreme lows like the movement of a wave.”

Xenlaii attempts to capture these extremes with an EP which is meant to sound like Durban at midnight.  The EP starts off very laid back with the opening track “Kwase Kwamnandi” a LoFi heavy track that captures the calm before the storm of a night out. Although not said to be a nod to the house banger by DJ BONGZ which shares the same name, the connection was too perfect to not mention.

We may assume that as the album progresses, we are also moving forward with the artist through a late night out in town. This is illustrated by “Idolz” and “How to Play” which both feel like they draw from more international references. Take the adlib heavy “Idolz” with its trap arrangement and triplet flows or the more Americanised cadence Xenlaii adopts on the “How to Play”. For me these two tracks represent the peak of the night out, it’s the last call and almost time to head back home.

“Idolz is there as a disruptor. The content is harsh, the beat knocks hard and it is trap. That is a representation of the brash nature of those nights. It is the high, the false self-breaking away from my natural energy. Plus, all we were hearing when we were out was Trap and Gqom so I had to place it there as a sonic shot of that moment.”

The “Surf Interlude” serves as a well-thought-out break, it’s the comedown, the ride back home, the post-party’s slightly clouded thoughts. The interlude works wonders to set the tone for the more serious second half of the album where Xenlaii faces the facts. “Cocoa Butter” reminisces about a current or past lover, it’s idealised while admitting that in reality, the relationship may not have been as ideal as he thought. On “Ballito Prayer” he references the loss of his mother and the cry for guidance from a higher power, now that his mother isn’t there as the guiding figure in his life.

Xenlaii is currently touring South Africa and it is plain to see that the artist had a bigger vision from the offset when it comes to the performative aspect of his craft. The Surf: Am Experience places emphasis on set design, which is usually not seen as a priority for artists on the come up, and also includes the screening of a short film. As Xenlaii explained, “For my team and I, we realized how important it is to create an experience around music. People share EP links online every day. We just wanted to create something that would make us stand out in this noisy environment. No one knew us at that point which meant no one would book us, so we decided to do our own show.”