Punk, indie and metal subcultures are inspiring and exciting, but they can also be very silly! From the hyper-macho obsession with being edgy to the pedants defining true fandom and accusing others of the cardinal sin of being  ‘poseurs’, it’s ripe for parody. And that’s exactly what the wonderful satirical website The Hard Times has been doing since 2014. The site publishes hilarious satirical stories which warmly mock the excesses and farcical aspects of punk, and rock music in general.   Here’s a sample of some recent ‘headlines’:

How to Pretend You Still Listen to Death Grips 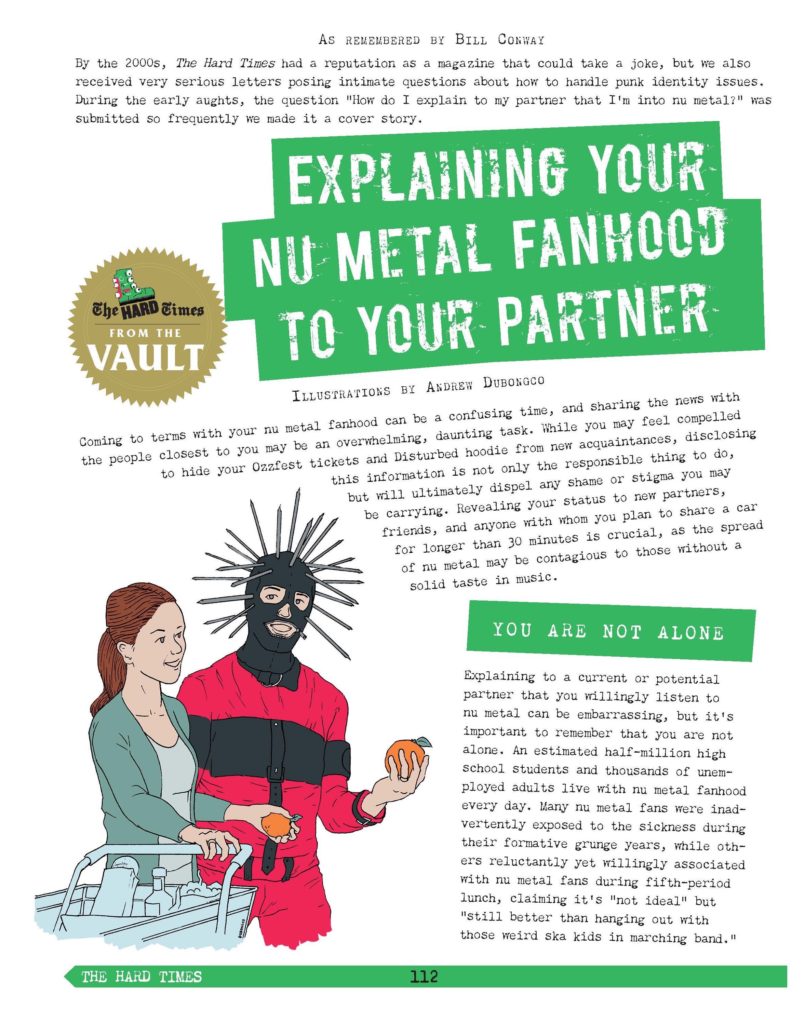 Inspired by the legendary satirical publication The Onion, the site uses surreal scenarios and clever writing to present stories that read like dispatches from a more absurd, parallel universe.  They have now immortalised their site in physical book form with The Hard Times: The First Forty Years. The book does for music what The Onion’s incredible 1999 book Our Dumb Century did for 20th Century history. That is, it tells a sharply researched, yet utterly ridiculous alternate history of culture. In the world of The Hard Times, punk bands become matters of global importance. Disgusting shock rocker GG Allin is a major pop star, US Presidents make public statements about the line-up changes of the band Black Flag and the Seattle grunge movement was a marketing ploy to sell flannel shirts.

These historical pieces are combined with reprints of some of the site’s best articles, such as the immortal ‘Straight-Edge Friend Total Scumbag in Every Other Way Possible’. The book also mocks the pomposity of music journalism, with running jokes about the Hard Times staff being incompetent, borderline criminals who are constantly on the run from angry musicians and creditors. The imaginative, yet warm satire, of The Hard Times is a true pleasure to behold.  This book, and the site itself, is a must for anyone who loves the ludicrous glory of punk!